Our NPAS Hawarden crew helped to locate a stricken tractor driver who had spent more than 10 hours stranded in floodwater in North Wales.

Dyfed-Powys Police have shared the story of how David Jones, aged 64, from Acton Burnell, near Shrewsbury, became trapped in the water on his way to a quarry near Llandrinio to collect stone at around 7.30am on Tuesday 22 February.

The River Severn had burst its banks in the area in the aftermath of Storm Eunice and Storm Franklin.

With Mr Jones trapped in a secluded lane, hoping and waiting for rescue, the alarm was only raised at 3.40pm when colleagues became concerned he hadn’t returned to the yard.

They reported him missing to Dyfed-Powys Police, which led to emergency services springing to action with partnership working between police, NPAS and Mid and West Wales Fire and Rescue Service, finding him marooned in his tractor.

“I was going to the quarry to get some stone,” he said.

“I was going through the water and it started getting deeper and deeper, so I had to stop or the water could have damaged the engine.”

Mr Jones said he was unable to call for help because his mobile phone battery was flat so he was forced to sit it out with no idea when help would come.

“I just had to wait for someone to come looking for me,” he said.

“I didn’t turn the radio on because I was worried about the electrics.

“I had my lunch with me so I was okay for food.

“Everyone did an excellent job to find me, it was a big relief to see the helicopter.”

Mr Jones was rescued thanks to great partnership working between emergency services.

Police had found a social media post of flooding that appeared to show a tractor in the distance, surrounded by flood water.

Officers then used what3words – a website that pinpoints locations – to guide the NPAS helicopter to Mr Jones.

Inspector Darren Brown said: “The tractor and trailer were located from photos and from a whats3words location.

“There had been no contact throughout the day, so we didn’t know if he was safe.

“We called in NPAS to get as close to tractor as possible to look inside. They saw a reflective jacket and movement, so confirmed somebody was inside.”

The fire service were then called in with a rib to take Mr Jones to safety.

Station Manager Andrew Richards, Mid and West Wales Fire and Rescue Service, said: “Our crews worked tirelessly over the weekend and into the early part of this week in responding to the regional flooding brought about by Storm Eunice and Storm Franklin.

“Our crews were already at another flooding incident and had rescued four people from their properties in the Llandrinio area when they called to assist the police to rescue a man in a tractor.

“Thanks to the support of the police helicopter that located the tractor within the floodwater, our Swift Water Rescue Team we were then able to deploy and access the vehicle and rescue the gentleman using a boat.” 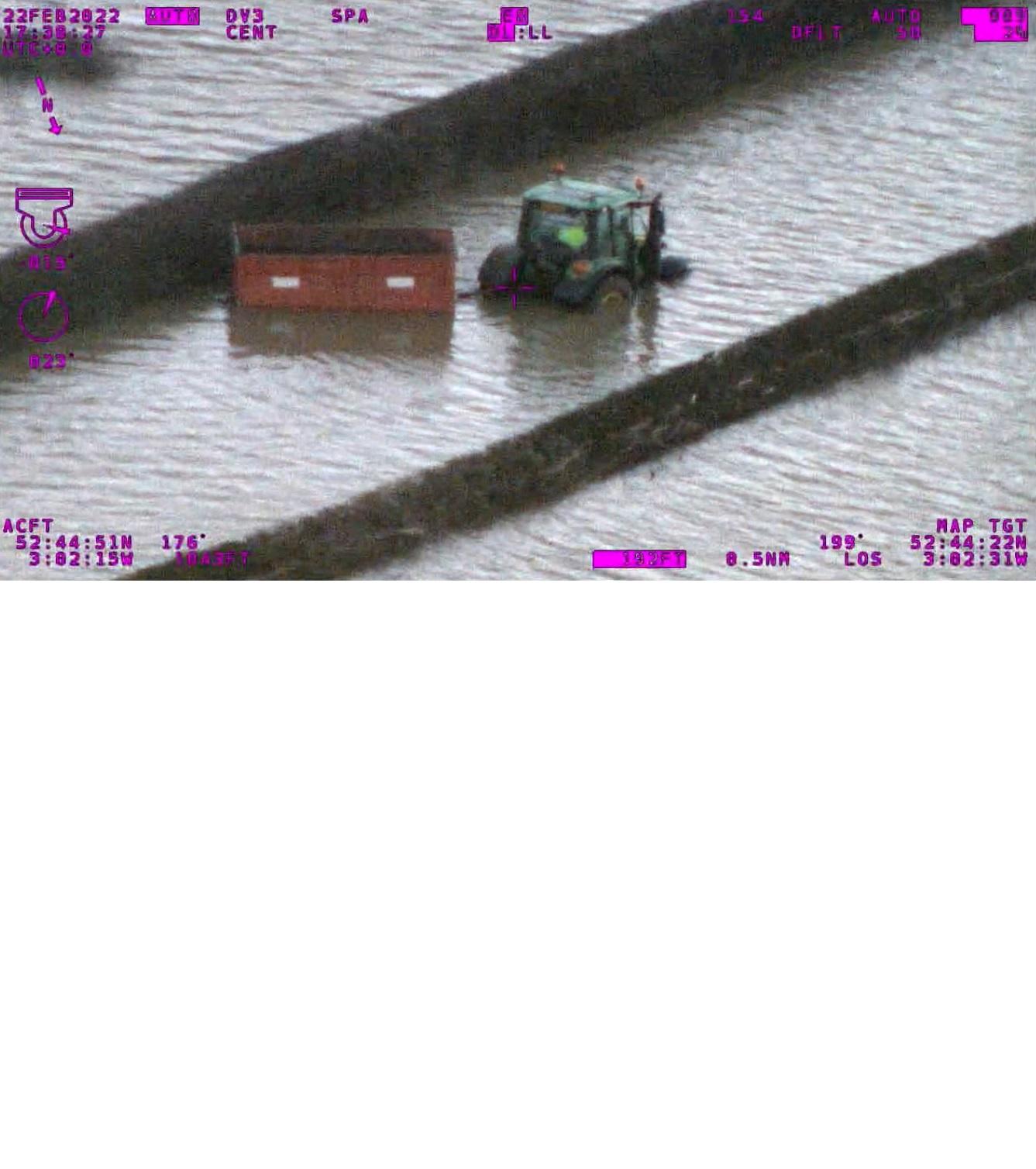